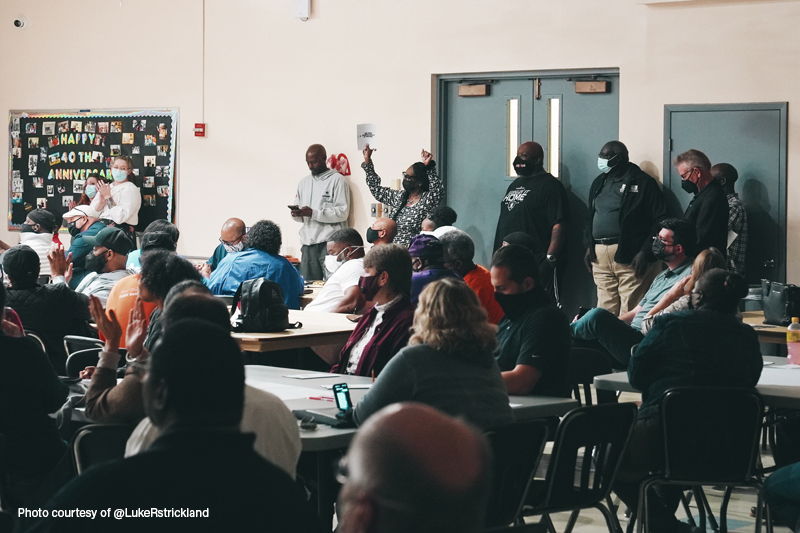 February 14, 2022 / Comments Off on Some St. Petersburg City Workers Say They Can’t Afford Their City

Some of the city’s lowest-paid workers say they can’t afford the city they serve.

Ron Overing is one of them. He cares for his ill parents, and last spring they had to move out of the two-bedroom apartment they had lived in for 20 years. They could no longer afford to live in their hometown.

But the city requires many lower-wage employees to live within city limits. The union negotiated for it in the early 1990s to make sure local workers of color get hired.

Now Overing and his parents live with relatives in Land O’ Lakes. He had to get a residency waiver to keep his job as a library assistant and commutes two hours a day.

Then the city tried to impose another rule that workers say could have made it even harder to make ends meet: tying raises to job evaluations. Overing said he hasn’t had an evaluation in nearly two years.

This week, in a stunning reversal, the city dropped that demand. But the residency rule remains amidst St. Petersburg’s scorching real estate market.

The city has about 3,200 city workers and more than half — police officers, firefighters and office workers — make middle-class wages but don’t have to live in the city. Then there are the 350 workers like Overing who work as custodians, library assistants, maintenance and sanitation workers. Many make $15 or less an hour, doing some of the hardest work for the lowest pay. Yet they say they’re required to live in an increasingly expensive city.

“I just really don’t know how normal St. Petersburgians are going to be able to live here,” said Overing, 34. “The city just put out a new posting for a bunch of new jobs, and I counted 15 or 17 that like, those people getting these new jobs couldn’t afford to live here.”

‘They would bring all their buddies in’

St. Petersburg’s workers have a history of fighting City Hall.

In 1968, the city’s mostly Black sanitation workforce went on strike to protest poor work conditions and unequal pay. The Rev. A. D. Williams King, the brother of the Rev. Dr. Martin Luther King Jr., attended one of the marches to City Hall. So did Southern Christian Leadership Conference co-founder Ralph Abernathy.

One of the striking workers was Fred Winters, who went on to become president of the International Brotherhood of Firemen and Oilers Union Local No. 1220. Today, it is known as the Service Employees International Union-Florida Public Services Union, which represents most of the city’s employees.

In the 1990s, Winters said the union learned the city was hiring few Black residents and was instead employing older white workers who lived outside St. Petersburg.

“One person would get hired that would live in Pinellas Park or someplace outside the city and then they would bring all their buddies in,” said Winters, 79.

Labor leaders met with then-mayor David Fischer and they agreed on a rule that certain city positions must be filled by those who live in St. Petersburg.

But it doesn’t apply to other positions. Police officers’ union contract requires them to live within a 60-mile radius of the city or a 2-hour drive of headquarters. Firefighters have no such requirement, and neither do the city’s professional workers.

Wastewater plant operator Tim Ott, now 67, was one of the leaders who met with Fischer. Three decades later, Ott says he’s softened on the rule he helped put in place.

“I hate to encumber someone else who’s not as fortunate as I am to have to live by that,” he said.

Workers who want a waiver need city and union approval, and more are starting to ask for them. Last year 11 workers filed for and were granted residency waivers compared to the 13 who got it from 2016-20, according to city records.

SEIU Florida Public Services Union communications coordinator Aaron Dietrich said there are more workers than that living outside the city.

”If they have to move, they’re not calling the union first,” he said. “They’re calling their landlord or the bank.”

‘You should be able to live where you want’

Gwendolyn Lieteau, 62, is one of the city workers who got a residency waiver last year. She started working for the city in 2017 as a library assistant making $13 an hour. A roommate and cash advances helped her get by.

Then her roommate moved out. Lieteau made too much to qualify for subsidized housing, so she moved in with a new roommate. But Lieteau, who is Black, said the roommate was a racist who harassed her and kicked her out during the pandemic. She said she recorded a video of the abuse to prove to the union that she had to move away from the city.

She got a waiver in March 2021 and moved to Lutz, nearly an hour’s drive away. Then she bought a house with her boyfriend in Holiday. Then one day her car gave out.

”It’s a ridiculous policy,” Lieteau said. “If you are able to get to work, you have transportation, and you come to work, you should be able to live where you want to live, where you can afford.”

Overing and Lieteau are the only employees who obtained waivers who spoke to the Tampa Bay Times. Others said they feared speaking out.

Workers who oppose the residency rule have an ally: The city has spent 15 years trying to get rid of it, said human resources director Chris Guella.

“That is a tenet, a real strong tenet of the union that they want to keep,” he said.

Union chief of staff Rick Smith defends the rule and wants to keep it in the contract. It helped desegregate the workforce, he said.

“There’s also that people are much more engaged, they care about the place that they live,” he said. The union, he said, has approved all requests for residency waivers.

Smith said the union supports the People’s Council of St. Petersburg’s efforts to make the city more affordable to live in. The organization is pushing the city to adopt rent control to reduce housing costs and displacement. Dietrich, the union’s communications coordinator, is an organizer for the council.

‘We break our backs for this city’

The city says the offer is competitive with other local municipal governments. Pinellas County and Orlando both offer 3 percent and 4 percent general wage increases, respectively, but no performance increases.

“We break our backs for this city … We’ve worked through an ongoing pandemic. We come in during hurricanes … We cleaned up the dead fish. And then when it comes time to pay us, nobody’s there. It’s crazy.”

Negotiations reached a nadir on Feb. 3. The union hosted a meeting at the Enoch Davis Recreation Center and invited city officials to make their case. Then union members took an informal vote on whether to negotiate with the city or go to impasse, which would result in a magistrate or City Council settling the issue.

Ray Oliver, 62, wishes he could have voted “no” more than once. He said he spent 19 straight days working 12 hours a day this past summer cleaning up the dead marine life that washed ashore during the Red Tide bloom.

He said his supervisor barely speaks to him. How could he get a fair evaluation?

“I love my town and I love police officers,” he said. “If I was a police officer asking for my money, it wouldn’t be an issue. We’re just as important.”

Kevin Jackson, a 59-year-old traffic signal coordinator who lives in the city as required, said his issue with performance-based raises is “the systemic racism that exists within the city that no one talks about. It’s the favoritism.”

Days later, Mayor Ken Welch surprised the union when he dropped the demand for performance-based raises.

”We look for something that was fair, that was sustainable, and it was in the best interest of the city and the employees going forward …,” Welch told the Times. “We want to get it resolved quickly and fairly.”

The contract is expected to go before workers for a ratification vote later this month.

Welch said he didn’t know about the residency requirement, but said his office will research whether it’s worth retaining.

“I can say pretty clearly that if we’re not paying our employees enough in our city, we need to reevaluate everything else we’re doing,” he said. “I know it’s difficult, but there’s no excuse for us to not pay the people who work for us to live in the city. That’s just ridiculous.”